The Structures Laboratory (STRULAB, 1991) is a facility of Civil Engineering Dept. of University of Patras. The Department academic personnel have an intense RTD activity in earthquake engineering since the 1980s. With the Univ. of Pavia, Grenoble and METU the Division awards MSc in Earthquake Engineering and Engineering Seismology to international and EU students through Erasmus Mundus MEEES project (www.meees.org).

The Department is highly reputable in the area of Structures & Earthquake Engineering and is included in the top 150 departments worldwide (2014 QS World University Ranking list STRULAB research activity includes over 40 EC (e.g. as partner PREC8, ICONS, SAFERR, CASCADE, NODISASTR, LESSLOSS, SYNERG, EXCHANGE-SSI and coordinating institute SPEAR, ACES, SERIES) or national RTD projects in the last 35 years. Its research outcome has been widely recognized (e.g. the current method adopted in EC 8, Part 1-3 for the assessment and rehabilitation of existing structures has been developed at STRULAB by Prof. Fardis). Research activity at STRULAB covers the seismic response of reinforced concrete structures, the design of new and the assessment of existing RC structures, the effectiveness of traditional/innovative systems for repair/retrofitting of substandard buildings and the behavior of bridges. New experimental techniques have been employed and further developed – it is one of the few facilities having performed distributed (intercontinental) hybrid simulation tests. Its research thrust had direct contribution to the prenormative research for European norms (Eurocode 8) through the lab Director, Prof. M. Fardis (ex-chairman of CEN/TC250/SC8 and currently vice-chairman of CEN/TC250).

STRULAB has an 18mx16m strong floor and two, 5.5m-tall strong walls (6m, 4m) in orthogonal configuration for biaxial testing. Its main equipment comprises 8 actuators (capacities 360kN to 1MN and strokes ±0.25m to 1.0m) and 9 pistons (300–1000kN capacities). Three of the actuators may be used for dynamic testing of components, with one of them (1500lpm servovalve) being employed for testing isolation devices. Continuous flow of 490 lt/min of oil is supplied by pumps, complemented by several standalone accumulators of different capacities. Two, 4-channel controller banks with networking capabilities are used for test execution, operated in tandem or independently. Its 128-ch data acquisition system is linked to a web database for on-line observation or off-line test rehearsal. The lab has implemented and operates for the last 5 years the central portal (www.dap.series.upatras.gr) of a distributed database (developed in SERIES project, www.series.upatras.gr) providing access and sharing of data available at the databases of participating labs.

Services currently offered by the infrastructure: STRULAB is among the few European laboratories employing the pseudodynamic testing method with sub- structuring (hybrid simulation) and between even fewer ones having performed a geographically distributed hybrid simulation comprising international participation. Advanced numerical simulation tools and models for the nonlinear response of structures under seismic excitation developed at STRULAB (www.ansruop.net) are also available. STRULAB operates a distributed database (SERIES project), allowing free query/access of data residing in local repositories of many European laboratories. The Data Access Portal (www.dap.series.upatras.gr) provides wide visibility to experimental data made available by several laboratories. The telepresence capabilities at STRULAB facilitate virtual presence of users during testing.

STRULAB infrastructure is particularly suited to seismic testing of small to medium–sized structures. Users will be supported by a primary group of two senior academics specializing in analytical/experimental research in earthquake engineering, and of two, highly experienced, postdoctoral researchers. 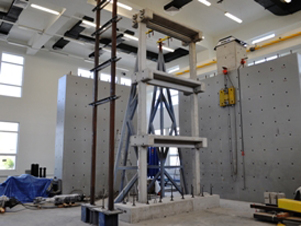 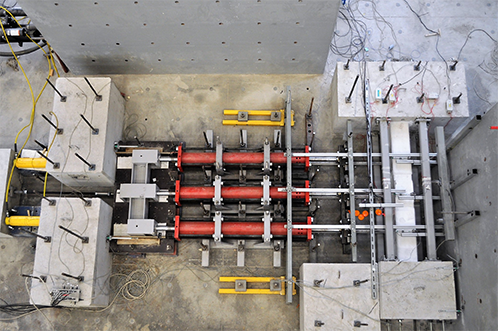 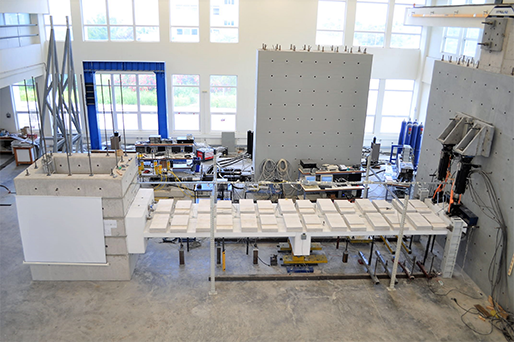